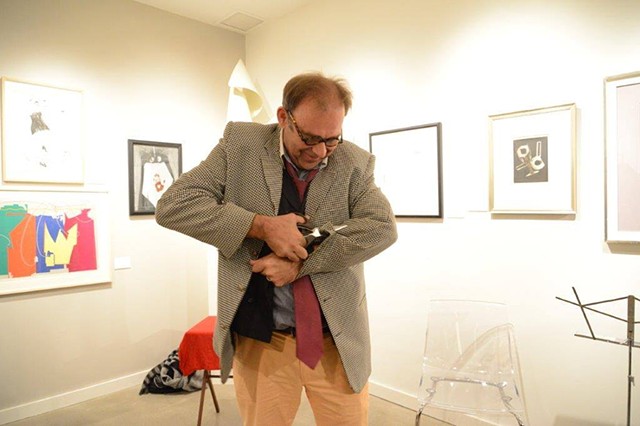 Patrice Lerochereuil By Eleanore Heartney An artist who lives between two countries, Patrice Lerochereuil creates work that exists between realms. He draws both from the spirit of aesthetic play that is so much a part of the French artistic and literary tradition and the more materialistic orientation of his adopted country, the United States. He creates work that resists conventional categories of genre or discipline – his paintings and sculptures are also performances, while his performances draw on the language of painting and sculpture. Perhaps because he switches continually between French and English, he is hyper aware of the arbitrary nature of language. In keeping with this, his work is rife with visual and verbal puns, these being devices that introduce cracks into the smooth surface of reality. In many ways, Lerochereuil’s philosophy is in keeping with the aesthetic dissonance associated with dada, fluxus and situationism, all of them movements that tend to be swept to the sidelines of art historical discourse because they challenge the grandiosity and the universalizing aspirations of Modernism. Lerochereuil notes that he is inspired by artists like Marcel Duchamp, Joseph Beuys, Guy Debord and Dieter Roth who were also tricksters and rule breakers. In some of his works, he pays them deliberate homage. In others, he simply preserves the anarchic freedom at the core of their processes. In all cases, however, Lerochereuil uses humor as a sweetener. This allows him to approach otherwise difficult or distasteful subjects in a way that engages audiences rather than turning them away. Take, for instance, his Partir c’est crever un pneu which borrows Duchamp’s bicycle wheel, and then deflates the art historical rhetoric that has settled over this signature readymade with the addition of a bicycle pump which he manipulates over the course of a performance. The title is literally deflating: eliding the notion of death and flat tire. Another recurrent theme involves the creation of a field of beached sailboats out of plaster casts of steam irons. Playing with the unexpected similarity in their forms, Lerochereuil parlays a domestic chore into the promise of freedom and travel. The work conjures the absurdist notion of waves flattened with the same ease with which wrinkles are removed from clothing.

Works can be inspired by chance events – as in Africa which memorializes an ink stain on the artist’s shirt pocket that resembles the map of Africa. Or they can be responses to art historical precedents, as in Partir c’est crever un pneu or a more recent performance work The springler springled in which Lerochereuil references Vito Acconci’s 1969 Following Piece by following Acconci himself. Some works, like Gypsy, a shoe from which a candle is emerging, have their origins in memory, in this case the artist’s childhood recollection of a similar candleholder he glimpsed in a Gypsy village. Sometimes Lerochereuil works with words alone, as in paintings that feature reversals, substitutions or scramblings of words that remake familiar clichés – for instance beware of owner before dog, I came I saw I came back or ordre is not improtnat. Or works can involve an unexpected marriage of image and word, as in Nut Case, where the ghostly addition of a word alters the reading of the logo found on a piece of farm equipment. In a number of unrealized projects, Lerochereuil employs an even greater range of imagination. These include the paradoxical House of Wisdom in which a red carpet running out of the four doors of a simple rectangular house serve members of a negotiating team ingress and egress before and after their secret negotiations within. Even more whimsical is Versailles, which proposes that the final game of the world cup should be played within the strict geometry of the garden of Versailles.

One constant in Lerochereuil’s work is the absence of any signature style. While many artists today seem more concern with “branding” their work than with exploring their creativity, Lerochereuil approaches art as a way of focusing attention. His medium is actually the world itself. Its absurdities, contradictions and irrationality are the materials out of which he creates an ever surprising, ever engaging universe of work.